THE SUBJECT OF THIS REPORT

At a large event in 2007 called The Golden Age of Knowledge for Eternity: The Basics, David Miscavige discredited original Scientology publications as being full of errors and released a new set of supposedly “corrected” editions called “The Basics.”

Original publications were collected and a detailed comparison between the originals and “The Basics” was performed. Statements by David Miscavige during the event were also carefully analyzed to verify their validity.

The analysis revealed that the 2007 event is full of LIES and DISINFORMATION and that the many changes introduced into the new editions are not corrections but random and malicious alterations of L. Ron Hubbard’s original content.

What this means is that David Miscavige and the entire institution of the Church of Scientology under his leadership has engaged upon a campaign of MASS DECEPTION of Scientologists and the public. David Miscavige and Church of Scientology organizations may also be liable under law for engaging in false advertising and consumer fraud with respect to selling false materials under the name of L. Ron Hubbard. In addition to having the name “L. Ron Hubbard” in large letters on the cover and title page of each book, every book in the set also includes a NOTE TO THE READER with the following statements: 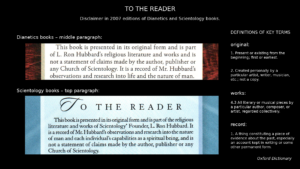 This report does NOT address the lectures that were released with the books, except for debunking David Miscavige’s claim that they “have never been available.”

A more complete and technical explanation for this analytical framework can be found on page: BASIC FRAMEWORK.

REALITY: An actual existence or occurrence (whether in the present, in the past, or potentially in the future).

PERCEPTION: A view (vision, conception) of given reality formed by the mind. Perception depends on the development and application of intelligence in relation to gathering and processing of information.

BASIS OF PERCEPTION: Contact with the actual reality of something vs. contact with direct or indirect representations.

POINT OF DIFFERENTIATION: The actual reality of something vs. someone’s representations about that reality which may be false or misleading.

POINT OF CONCERN: The degree of alignment or disconnect between someone’s formed perception and the actual reality that is the object (or target) of perception.

The term AUDIT in the name of this report comes from the field of Accounting:

[Wikipedia] Auditors perceive and recognize the propositions before them for examination, obtain evidence, evaluate the same and formulate an opinion on the basis of their judgement which is communicated through their auditing report.

An unqualified, or clean, audit opinion means that the auditor has not identified any material misstatement as a result of his or her review of the financial statements.

[Businessdictionary.com] Systematic examination and verification of a firm’s books of account, transaction records, other relevant documents, and physical inspection of inventory by qualified accountants (called auditors).

In performing an audit, an accounting auditor examines “source documentation” as well as physical reality (such as looking at inventory on hand) related to business assets and activities to verify that the resulting accounting entries and financial statements of a given institution accurately REFLECT THE REALITY to which they apply.

A source document is an original record which contains the detail that supports or substantiates a transaction that will be (or has been) entered in an accounting system. In the past, source documents were printed on paper. Today, the source documents may be an electronic record. [AccountingCoach.com]

Some common examples of source documents include sales receipts, checks, purchase orders, invoices, bank statements, and payroll reports. These are all original documents that were created from a transaction… Source documents are used to record transactions because they are original and show an objective report of the economic activities of each transaction. [myaccountingcourse.com]

The general concept of accounting audit was applied in this case to quite literary audit Scientology books and representative statements by David Miscavige during the 2007 event.

Of course, all of this “theoretical complexity” can be reduced to simpler, common concepts of fact checking or performing a reality check.

Note, this report is based on the findings originally presented on TrueLRH.com and is meant to work in combination with that website.

This website – ScientologyAudit.com – is also a sub-project of CivilizationUpgrade.com. If you need to contact the creator of this website, you can write an e-mail to admin@civilizationupgrade.com.