Scientology: A New Slant On Life

DM: Our final beginning book is one that’s long been the most popular with Scientologists – Scientology: A New Slant on Life.

Yet no matter what we’ve had before, nothing compares to this new edition.

Indeed. David Miscavige removed a whooping EIGHTEEN (18!) chapters from the book – the book that he said has been “the most popular with Scientologists.” If that’s so, why remove more than half of the content from the book? 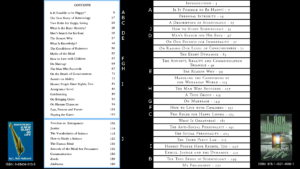 To make up for this missing space, he populated the book with chapters that are readily available in other beginning books:

From Self-Analysis: On Our Efforts for Immortality | On Raising Our Level of Consciousness.

From The Fundamentals of Thought: The Eight Dynamics | The Affinity, Reality and Communication Triangle.

From Problems of Work: Handling the Confusions of the Workaday World

This leaves us with 5 unique chapters (not including the Introduction) that were added into the book: Personal Integrity | A Description of Scientology | A True Group | What is Greatness? | My Philosophy.

The chapters that David Miscavige removed are some of the best and useful parts of Scientology addressing the key components that make up the subject – such chapter as:

What is Knowledge?
Accent on Ability
Communication
Acceptance Level
Confronting
On Bringing Order
Freedom and Entrapment
Playing the Game 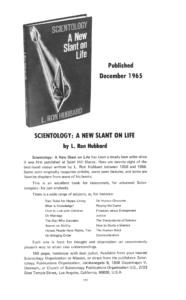 Some of the removed chapters came from more advanced material that was SIMPLIFIED for those completely new to Scientology, and some appear to be unique to this book. [See trueLRH.com for a detailed table of the identified sources for the various removed chapters.] So while the added chapters are easily found in other books, the chapters that were removed contain UNIQUE CONTENT that is now lost and unavailable – the content that is RUDIMENTARY for gaining a simple and practical understanding of the subject of Scientology in view of the common experience of living.

The original A New Slant on Life was UNIQUE and EFFECTIVE, while the 2007 version reads like a direct repeat of the material from other beginner books. It not not unique. If someone who is new to Scientology buys a set of beginer books: The Fundamentals of Thought, Problems of Work, Self-Analysis… they will notice that many chapters are the same one book to the next, and that could actually result in a bad impression – like A New Slant on Life was compiled in order to just make more money on book sales and not actually provide UNIQUE VALUABLE CONTENT. [I’m speaking from personal experience of having made this exact observation when I bought my first set of beginner books consisting of these 2007 editions].

The 2007 edition now includes a number of chapters from Scientology “ethics” which can be easily viewed as some of the worst and problematic parts of Scientology.

Then to top it off, the book has been populated with some creepy and “dark” artwork that reminds of the kind of art that would be produced by someone suffering with schizophrenia or some other mental malady. The artwork features human forms as LIFELESS OBJECTS blended with the “MEST Universe” – demonstrating the exact opposite condition from where Scientology was supposed to take people, at least according to its Founder, L. Ron Hubbard.

Who created and approved such artwork for this book? Perhaps it could actually be used for psychoanalysis to understand the kind of “psychological state” that people would find themselves in while working with David Miscavige? – people reduced to “mechanical objects” deprived of the feeling of life and one’s own human identity. This is similar to the kind of “visual” that was produced for 2007 Self-Analysis – just blank human silhouette standing on dried and cracked ground devoid of life. [For Self-Analysis see: trueLRH.com ]

And this is an image for chapter: The True Story of Scientology. 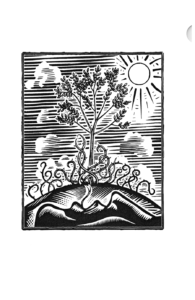 What in the world is it supposed to communicate? What was the person thinking when producing this image? – a demonic, human like figure with snake tongue in the ground giving birth to bushes of thorn supposedly devouring a tree.

This perhaps is supposed to demonstrate the negative gossip “assaulting” Scientology that is represented by the tree… but the tree also grows out of the ground – virtually straight from the snake tongue. If the demonic face with snake tongue represents the “soil,” then everything growing out of that soil is its product. In this wise, it could be interpreted as: Scientology contains some fruitful knowledge – represented by the tree – but it is full of devouring thorns.

There is definitely something to talk about when it comes to some of this “artwork” produced by Church staff under David Miscavige.

Outside of the images on the removable covers, the original publications had no artwork. Artwork is a form of communication that can in itself cause misunderstanding, if not done properly. If the author of the books, L. Ron Hubbard, did not work out any artwork designed to demonstrate the content of his writings, then it is best to leave it without. If someone wanted to produce artwork on the subject of Hubbard’s books, it should be presented in its own, separate publication, not integrated into what should be books by L. Ron Hubbard.