The Fundamentals of Thought

The disconnect between REPRESENTATIONS by David Miscavige and the ACTUAL REALITY that can be seen by inspecting the actual materials seems to be a constant factor throughout the event.

As clearly stated in the original description of this book: 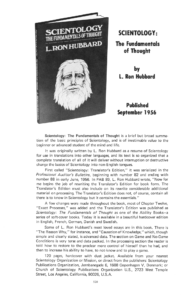 It was originally written by L. Ron Hubbard as a resume of Scientology for use in translations into other languages, and its text is so organized that a complete translation of all of it will deliver without interruption or destructive change the basics of Scientology into non-English tongues.

The beauty of having the original materials is how simple, straightforward and easily verifiable everything is. There is no “mystery,” no confusion, no convoluted “story” to untangle. Everything is right there directly and openly communicated in professionally organized official publications that were produced under direct supervision of Scientology Founder L. Ron Hubbard and legally copyrighted under his name.

Below are the first two pages of PAB 82 – the first PAB in the sequence. It begins with a note with some explanations and instructions and then, after a line break, presents a body of text which turned into the first chapter of the book The Fundamentals of Thought. The first two pages from the actual chapter of 1976 reprint are provided, and the text is almost exactly the same as in the PAB with addition of a few more sentences – just as Ron Hubbard had noted that he was going to rewrite some things when writing the actual chapters for the book.

Everything checks out. “Simplicity in the extreme” – as David Miscavige had said at some point during the event – only this “simplicity” is exactly what the original publications represent, but the new 2007 remakes are a mess! 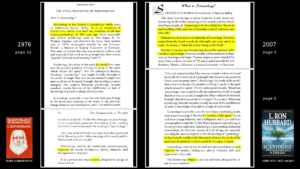 So the very definition of Scientology as a subject that was INTENDED BY THE FOUNDER AND AUTHOR L. RON HUBBARD for this book was overwritten and confused. And this tempering with Scientology’s definition already took place in the first remake edition released under the leadership of David Miscavige in 1988:

Any comparison between Scientology and the subject known as psychology is nonsense.

Oh yeah? Who wrote this goofy sentence in 1988 edition?

Ron Hubbard wrote that Scientology was a “branch of psychology” and then he expanded on the definition of the word “psychology” indicating where this field of study went off the rails with “Wundtian psychology.” But in 2007… basically, you can read it for yourself on the comparison slide.

This was material that was meant to be easily translatable into other languages, so what is an easier way to explain what Scientology is than to relate it to a concept that most people can already understand – psychology – while clarifying its definition in the process. It’s a genius move on Hubbard’s part – to present Scientology as the true form of (a more developed) psychology [at least from his point of view] while invalidating the conflicting teachings of Wundt. It is designed to immediately orient people who are interested in psychology toward Scientology away from the “faulty alternative.”

Then Hubbard follows up with a statement that Scientology is “a precise and exact science, designed for an age of exact sciences.” Wow. Nice! Sign me up!

It is straight and clear – things easily connect resulting in immediate clarity, interest and a drive for action.

But in 2007: “The Scientology RELIGION is precise and exact, designed for an age of exact sciences.” What does it mean, “precise and exact religion“? How can religion be “precise and exact” when the very notion of religion is that it is based on FAITH or BELIEF? How can faith be “precise and exact?” These concepts just don’t connect! Hubbard would never write something like this. If there was a possible area of confusion, he provided EXPLANATIONS or CLARIFICATIONS because as an experienced writer, communicator and educator – in the field of the mind, out of all things – Hubbard could anticipate a possible confusion or misunderstanding, predict a potential lack of duplication, and provide clarification for what he meant.

In fact, Ron Hubbard uses the word “religion” in The Fundamentals of Thought in its traditional sense:

Chapter: Parts of Man
The manifestation that our hereafter is our next life entirely alters the general concept of spiritual destiny. There is no argument whatsoever with the tenets of faith since it is not precisely stated, uniformly, by religions that one immediately goes to a heaven or hell. It is certain that an individual experiences the effect of the civilization which he has had part in creating, in his next lifetime. In other words, the individual comes back. 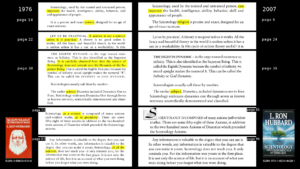 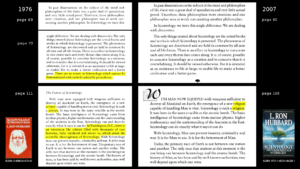 And how does saying that Scientology is a “religion” align with the statement that it is a “new psychology?” Things don’t connect now – in all kinds of ways! Of course, it would already be enough to simply point out that Ron Hubbard’s intended communication was altered and distorted, but it is also important to consider this additional analysis of how the communication was not just distorted, but how this distorted text now DOES NOT MAKE SENSE and would only result in CONFUSION and LACK OF UNDERSTANDING on part of the reader who will then associate such confusion and non-comprehension with the subject of “Scientology” itself. In other words, the new distorted text serves to confuse, inhibit and to ultimately repel a reader from the subject.

ORIG: Scientology – a new form of psychology and an exact science. Nice and clear!

Another thing to note: what if somebody reads the book in year 2050 when the field of psychology has radically been transformed with major discoveries in the field of neuroscience – the word “modern” would not apply. It makes such text susceptible to quickly become outdated.

There is just one problem after another at every area of alteration. If a video was done in the way of analysis of the distorted text in itself [which was my original intention for this report], just this one area would take at least 15 to 30 min of talk, in order to touch upon all the different problems that such alterations introduce.

Obviously, the big question can be raised: Who exactly is the author of the added portions of text, of entire sentences that were added? Where did they come from? Who exactly formulated them and added them into the book? Do they come from elsewhere in Hubbard’s materials, or was it completely made up by David Miscavige or someone under his command?

For example, this sentence – the very definition of Scientology as a subject – where did it come from?

Scientology is further defined as “the study and handling of the spirit in relationship to itself, universes and other life.” 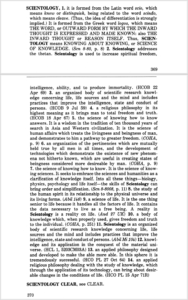 It is not in the Technical Dictionary which lists various definitions that Hubbard provided in various materials. There is a similar definition cited from magazine Ability 146, but it’s not exactly the same – so what is the source for this added sentence in the 2007 remake? Of course it is completely unacceptable that anything has been changed at all, but this is taking the analysis a step further to question the very origin of the added text.

Plus, It is a rather technical definition – definitely not something that one would present to a completely new person, and in a foreign language – and so it represents a completely different form of communication than what was intended by Ron Hubbard for this book.

On the subject of Ron Hubbard’s thought of Scientology being a “science,” let’s take a closer look at the note from PAB-82: 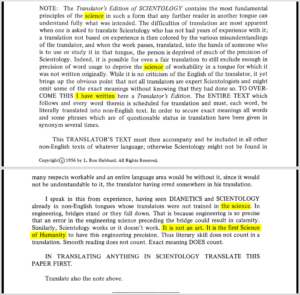 Here is a VIDEO of L. Ron Hubbard, and that’s in 1968! – more than a decade after The Fundamentals of Thought was initially published.

And if this wasn’t enough, here are three pages from Technical Bulletins Volume 3: 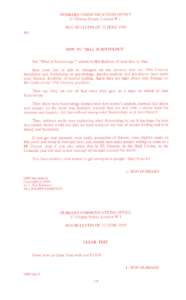 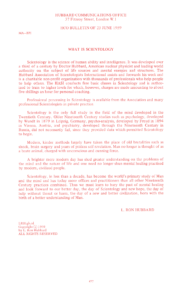 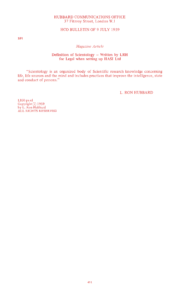 And here is a PHOTOGRAPH of L. Ron Hubbard with what looks like a copy of The Fundamentals of Thought in a pile of books to his right.

But the general question still stands: So is Scientology a SCIENCE or is it a RELIGION? In Ron Hubbard’s mind it was BOTH! And he held that view from the very beginning of Scientology development – so it’s not like something has changed in that regard in some later years. One of the best references for how the notions of science and religion crossed in Hubbard’s mind with respect to Scientology comes from the very first issue of Ability magazine provided in the Technical Bulletins Volume 2. Note that this is in 1955 – a year BEFORE he authored The Fundamentals of Thought. 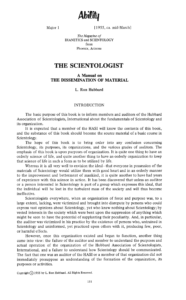 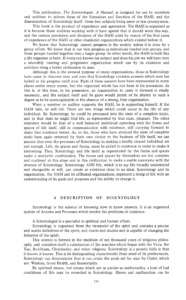 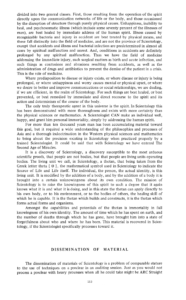 Scientology is the science of knowing how to know answers. It is an organized system of Axioms and Processes which resolve the problems of existence.

A Scientologist is a specialist in spiritual and human affairs.

Scientology is organized from the viewpoint of the spirit and contains a precise and usable definition of the spirit, and charts and studies and is capable of changing the behavior of the spirit.

This science is formed in the tradition of ten thousand years of religious philosophy and considers itself a culmination of the searches which began with the Veda, the Tao, Buddhism, Christianity, and other religions. Scientology is a gnostic faith in that it knows it knows. This is its distinguishing characteristic from most of its predecessors. Scientology can demonstrate that it can attain the goals set for man by Christ, which are: Wisdom, Good Health, and Immortality.

By spiritual means, but means which are as precise as mathematics, a host of bad conditions of life may be remedied in Scientology.

Here is an HCO Bulletin and an HCO Policy Letter where Ron Hubbard expanded on the religious angle of Scientology: 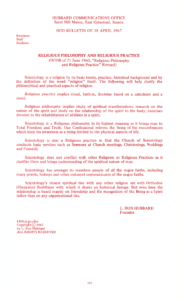 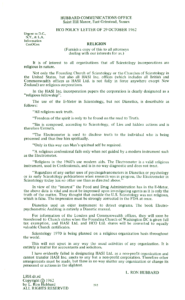 If Ron Hubbard wanted to elaborate on the religious angle of Scientology in The Fundamentals of Thought, he would have done that with the very first publication or with an updated edition at any point before his passing in the 1980’s, but he never did. In fact, he did update the book sometime pass 1965 with THE AIMS OF SCIENTOLOGY which can be found at the end of 1976 printing, but which was not included in the 2007 remake.

This text can also be found on page 88 in Technical Bulletins Volume 6 (First Printing 1976).

Ron Hubbard definitely knew what was in the book, and the original publication from the 1970’s represents the most up to date edition that is exactly in line with what Ron Hubbard intended for this book. So what was the basis exactly to introduce such radical changes to the content of this book in the 2007 remake? What exact LOGIC was used for doing so? How were these changes justified among Church staff that worked on this project of “correcting” Ron Hubbard’s books?