All Scientologists know the policy of Keeping Scientology Working that David Miscavige cited while directly contradicting what it actually says, but they DO NOT SEE what is right in front of them – especially in relationship to the CONFLICTING STATEMENTS by David Miscavige.

What’s even more concerning is that this event isn’t just something that happened years ago and then “forgotten” where it could be excused that Scientologists in the audience could not think straight in the heat of the moment. No… The video of this event has been translated into many other languages and mailed out to Scientologists (on DVD) around the world. It has been available on Scientology website since 2010, and anyone coming into the Church since 2007 is usually asked to watch this event. This video is constantly referenced whenever someone has questions about the new “Basics” which also means that Church staff are exposed to this information and the statements by David Miscavige many times over as they keep showing this event to new people coming into the churches of Scientology. The KSW policy is included in almost every course pack, and Scientologists are made to read it as part of virtually every professional course. This is an ongoing “phenomenon” for YEARS – the staggering absence of analytical observation and critical thinking. 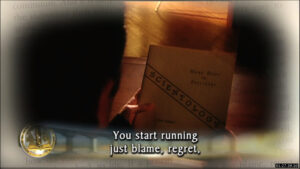 The reason I included a video segment of Ron Hubbard’s lecture that was demonstrated after David Miscavige said his lines regarding the Handbook for Preclears, is because during that segment (which was most definitely created by Scientology’s Golden Era Productions using Sea Org staff members as actors), you can see footage of a Scientology staff member (as an actor) holding an actual copy of Handbook for Preclears FIRST PUBLICATION – the publication that serves as evidence of the fact that both phrases life continuum and life continuation appeared in the book since its first publications. This fact then serves as further proof and clear evidence of the fact that David Miscavige outright lied to Scientology parishioners about a supposed mistake or a problem with the book which never actually existed. The whole problem and the story surrounding it (of how “no one knew what it meant”) was simply made up by Miscavige based on nothing. And no one among Church staff made any such “correction” in the 2007 edition because there was never any such mistake to begin with. This means that they printed that area of text just as it has always been.

Think about this! It’s one thing that Scientology public listen to this assertion/claim by David Miscavige while having no access to an array of previous publications to VERIFY the validity of what he is saying for themselves. But what about Church staff members – especially Church staff that created the very visuals for Miscavige’s speech and then processed the footage of the event afterwards? They HAVE ACCESS to Ron Hubbard’s previous publications. In this instance, this can be directly evidenced by the fact of a Church staff member holding the first publication of Handbook for Preclears right there in the video.

Look at what Church staff members at Scientology’s Golden Era Productions themselves say (I have trimmed the original video which originally is 8min 49sec long):

And yet there is more! Here is another video representation about the “scripture restoration” project spearheaded by David Miscavige (video selection):

How come no one QUESTIONS and VERIFIES the statements by David Miscavige?

Shouldn’t at least a simple question arise in the minds of Scientologists, staff or public, with respect to Miscavige’s alarming claims: IS THIS TRUE?

Shouldn’t people have an urge to KNOW for themselves and have certainty in the truth of something through PERSONAL OBSERVATIONS, ANALYSIS AND CONCLUSIONS?

Isn’t it what SCIENTOLOGY supposed to be all about: KNOWING HOW TO KNOW – the science of KNOWING, of AWARENESS?

Ron Hubbard in his own words:

Video source: An Introduction to Scientology DVD (interview in May 1966)
https://www.scientology.org/store/item/introduction-to-scientology-dvd.html

If, according to Ron Hubbard, Scientology is supposed to get people to a greater state of KNOWING and AWARENESS, then how come Scientologists are so UN-KNOWING and UN-AWARE – at least with respect to things that they should know and be aware of? It seems Scientologist only operate on the basis of information and directions that are provided to them, and no further.

After all the confusion created by David Miscavige is removed and the path is cleared to look at the original materials and their condition, it becomes quite evident that Scientology was EXACTLY as Ron Hubbard intended it to be, at least up to the point of David Miscavige taking control in the 1980’s. There was nothing wrong with any of its materials, and its organizational structure was setup directly by Ron Hubbard. If such is the case, and if Scientology truly worked to increase awareness and ability, then how would it be possible for such a BAD SITUATION to develop in the first place?

Not only Scientologists seem completely oblivious to their own deception, they are actively involved in producing and disseminating it! Church staff members operate based on lies and deception that they themselves help to produce. This is going a step beyond just being deceived on the receiving end.

And what about what Church staff members say and what they PRESENT TO THE PUBLIC in terms of their main mission, their values and priorities, in terms of what they have been doing, and the quality of their lives at Church compounds – this “reality” they present of themselves – is it also a lie? Is it COMMUNICATION DESIGNED TO DECEIVE – the mixing of truth and lies to create DIS-INFORMATION and to create DE-CEPTION?

How does such PSYCHOLOGICAL CONDITION exist in Scientology? What are its MECHANICS and how can it be resolved?

Such questions and observations is what lead me to develop detailed analysis of Scientology concepts and methods, and to understand how they shape PSYCHOLOGY of people in Scientology. I have these analysis posted on ScientologyAnalysis.com. I then moved beyond that to develop a complete alternative framework – see CivilizationUpgrade.com – that is in line with professional fields such as neuroscience and which aims to accomplish what Scientology promised to accomplish but never did – to give people simple and easy to understand science of the mind and consciousness with potential for immediate practical application.